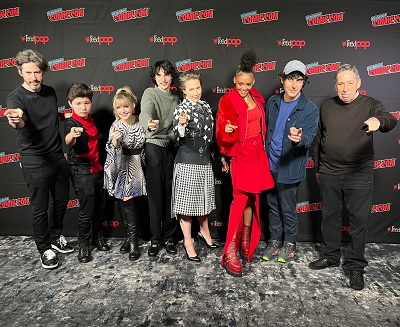 With only 41 days standing between now and the general release of Ghostbusters: Afterlife, the marketing machine is continuing to build momentum through merchandise and high-publicity events, like last night's panel at New York Comic Con.

During the half-hour panel, the cast and crew reflected on the film, providing quick summaries of their respective characters, and on the gestation of the film's central concept.

Possibly the most poignant moment came when Jason was detailing the moment the film's core story came together:

And that's where it came from... You know, I've said this story a lot, maybe some of you have heard it before... But, look, there was a moment where I just saw this girl in my head, she was just 12-years-old, and she was picking up a Proton Pack in the middle of a field and I didn't know who she was...

And then I saw this... This teenage guy... And he was in Ecto-1, and he was drifting through wheat fields... And I didn't know who he was...

And when Harold Ramis passed away I suddenly knew who they were... They were the Spenglers, and I knew I needed to tell this story.

As for the future of the cinematic franchise, Jason was optimistic that his film would open the door to "Ghostbusters movies from all of (his) favourite directors", suggesting that he doesn't have explicit plans to create a sequel, but he has hope that others will follow his lead.

At the panel's closing, those in attendance were treated to a surprise bait-and-switch, under the expectation that they would be seeing clips of the new film, they were instead given a special advance preview of Ghostbusters: Afterlife.

For those who wish to watch the whole panel, Gragon Productions on YouTube has uploaded a spoiler-free video which can be viewed here: LINK
robbritton liked this
Feeling overwhelmed by the Covid-19 pandemic? Please visit The Support Thread.

I did a quick search of the thread and I don’[…]

Do Alice frames kinda work like a kickstand fo[…]

You can unscrew the bolts but the nuts fall out[…]